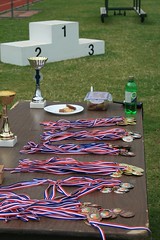 Sports day was yesterday and absolutely great. It was an early start for my class, we had to be in school by 7:30am and ready on the coach to leave the school at 7:45am.

The day was split into half, morning Early Years & Key Stage 1; the afternoon for KS2 and Secondary school. It was a huge event to organise and must have taken the PE department lots of time. The convoy to get the children and staff to the venue (The Royal Thai Army Sports Stadium) was 5 coaches and 3 minibuses long, and given a police escort!!!

We got there ahead of time, the stadium was impressive – especially for the event, about the size of Crystal Palace in London. Usual events were placed around the track and the pits used for standing long and triple jumps.

The children were split into groups and rotated around the events and were finished in time for lunch. In the past, and on other trips we have been supplied with a carton of fried rice and breaded fried chicken (a favourite of mine!) but this time the catering people came to the stadium and served us there. Not the healthest of meals: Garlic Fried Rice, Breaded Chicken, Sweetcorn on the cob, some veg and a choice of three different burgers (one veggie). With the Friends of the school providing some sticky rice and pork meal as a choice with some sweets and various juices. There was also one of the Walls Ice Cream bikes there dishing out free ice-lollies… I had three, it was very warm!

I really enjoyed the day and so did my children I’m not sure how possible it would be in other schools. Certainly it was made a lot easier here by the sheer number of staff the school has (cleaners to take with us, maintenance staff to transport equipment ans set up, and IT dept. to arrange a PA… the list goes on), also the involvement of the parents makes life easier overall I’m sure!

All the children received medals in assembly today which was really nice, they were good too, large and heavy, I have to admit I was expecting something cheaper – probably made out of plastic!

I am now working in Hackney, London as a Headteacher. This is my 10th year teaching, and my3rd in Hackney. Previously I had taught in both Key Stage 1 & 2, along with the EYFS for 4 years, both in various London Boroughs and in Bangkok, Thailand. My other responsibilities have included leading ICT, English and Assessment across whole schools and I have previously held Phase Leadership in all 3 Primary Phases.
View all posts by Tim Jackson →