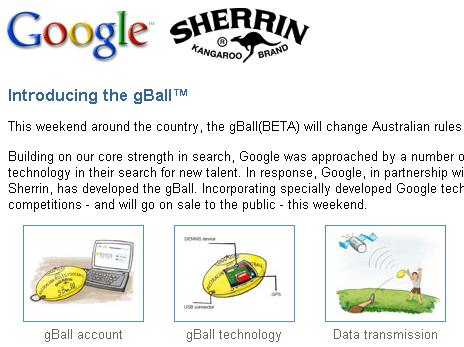 Announcing the release at the weekend of a ball (in true beat style) that would gather data and feed back to the user about their kicks… all while plotting it on Google Maps!

Taken from the Google Site:

This weekend around the country, the gBall(BETA) will change Australian rules football as we know it.

Building on our core strength in search, Google was approached by a number of Australian rules football leagues to apply our technology in their search for new talent. In response, Google, in partnership with the official supplier of matchballs to the AFL, Sherrin, has developed the gBall. Incorporating specially developed Google technology, it will be used in all school and amateur competitions – and will go on sale to the public – this weekend.

All I have to do now is wait to see what the other locations offer up… they don’t seem to have done one here in Thailand, but then why would they?

I am now working in Hackney, London as a Headteacher. This is my 10th year teaching, and my3rd in Hackney. Previously I had taught in both Key Stage 1 & 2, along with the EYFS for 4 years, both in various London Boroughs and in Bangkok, Thailand. My other responsibilities have included leading ICT, English and Assessment across whole schools and I have previously held Phase Leadership in all 3 Primary Phases.
View all posts by Tim Jackson →